Flamenco is difficult enough as it is, but it gets even crazier when you add obstacles like bata de colas and mantones. I’m having a love affair with mantones right now. What am I saying… right now? I’ve always had one! I’ve been collecting them as well.

They’re not cheap, let me tell you! Some people can find good deals on Ebay for some mantones. Others splurge when they’re in Spain. I’ve bought a few nice ones in Chinatown in San Francisco years and years ago. Really! I have a few that I use in classes that I bought online from Hong Kong. But I also have several very nice ones that were gifts or that I splurged for. Just like shoes, one can never have enough mantones.

Even though I always love mantones, right now I really have them on my mind. I’ve choreographed a Sevillanas with it and I’m working on a Tientos solo for one of my dancers. So, I’ve been trolling for manton love on YouTube.

The thing about dancing with a manton is that it has to be big enough and heavy enough to move around and fall nicely. If it’s too small, you can’t get it around your head. If it’s too light then it just flops around. But, of course, the opposite is also true. If it’s too big and too heavy you drown in it!

My students call it the blanket of death! It gets dangerous alright! It gets caught in your hair clip or earrings. It knocks off your glasses. The fringe gets caught in other dancers’ fringe. It can get messy!

But it’s beautiful, challenging and it adds a deeper layer to the beautiful art form.

I’ll add a video of my Sevillanas con manton when I can get a nice shot of it. But in the meantime, enjoy these video favorites of mine.

Olga Pericet with a manton as big as her!

Choncha Jareño with double trouble, manton y bata de cola! Ole!
La Truco with more double trouble with manton y abanico!
Maria Pages using the manton fully open and then amazingly folding it in half while she turns (start at around 2:15).

Flamenca Got Back! Or Another Way to Get Stronger Flamenco Footwork 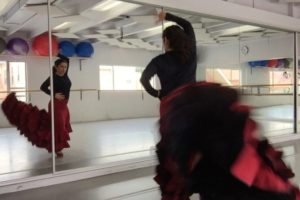 My students jokingly call the bata de cola the “dress[...] 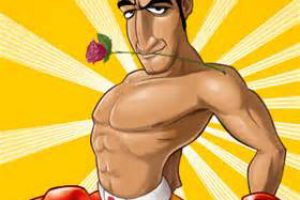 Don Flamenco says,”Amorcita, por favor, use your core muscles to save[...]