Learn Flamenco with your EARS

Learning flamenco is more than learning a bunch of moves. It’s understanding a whole new language! Of course, there’s a whole new dance vocabulary and structure as part of the language. But it’s also the idea of really trying to understand flamenco.

It really all starts with internalizing the compás, learning the nuances of the different rhythms (palos), and being able to identify the components of a dance number. So, what’s one way to do that?

Each palo, or flamenco rhythm, has its own tempo, melody and chords even though there could be many variations.

First pick one palo, preferably one that you already have learned in class. Next, listen to the solo compás recordings of it with just the guitar. See if you can “identify” that sound that makes it that particular palo.

You hear one or two chords and think, “Boom! That’s Alegrías!” It’s just like that game “Heardle”. Then you can move on to other recordings and you hopefully will have found that common thread of melody throughout all of them. After that you can graduate to listening to random music and identifying it.

UNDERSTAND THE COMPAS WITH PALMAS

Playing palmas (hand clapping) is essential to being able to internalize the compás. Giving palmas for your fellow dancers supports their dancing and gives you the responsibility and the sensitivity to not rush or slow down the tempo unless the dancer makes you. Even better, learn the skill of playing palmas for yourself as you dance and do footwork.

UNDERSTAND THE PEAKS AND VALLEYS

Once you can identify the palo by listening to the chords, then play palmas to it somewhat comfortably, then it’s time to really listen to the cante so you can FEEL the transitions.

This means understanding the rises and the falls within a letra (verse). La caida is that “fall” or “resolve’ within the cante. I like thinking of it as peaks and valleys of expression. If you can “hear” this caida, then you are better able to dance with expression to the cante and know when to transition to another move or make strong accents.

Listen to this solo compás with guitar to identify just the compás. Can you hear the 12? Can you play palmas and hear that chord that makes it sound like Alegrías? (I’m not a musician so I can’t tell you what that is– you have to be able to just hear it!)

Then watch a video of my own solo. Can you identify it as Alegrías? Can you play palmas to it?

Now focus on the letras from the video. Do you hear the peaks and valleys, where there is a caida so that the dancer can transition or resolve with the cante?

Test it out and have fun. Remember, it’s a process!! 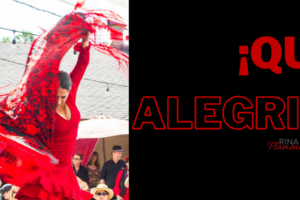 Alegrías is such a wonderful rhythm in flamenco! Happiness! Joy![...] 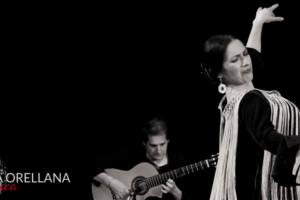 Solea, the heavy hitter of flamenco 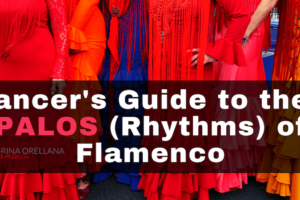 Dancer’s Guide to the Palos (Rhythms) of Flamenco

When learning flamenco, dancers can become so overwhelmed with understanding[...]